As we reported earlier http://www.vicky.in/blog/chevrolets-new-aveo-u-va-2008/ GM Chevrolet will soon launch the new Aveo in India.  General Motors unveiled its new aveo(aveo U-VA in india) at the Frankfurt Motor show last year and ever since it was unveiled Indian customers has been waiting for this new car. From the styling point of view, the aveo U-VA looks more aggressive compared to staid current one.The big split radiator grille with a prominent crossbeam are typical styling cues of every modern european hatchbacks. The dynamism in styling of new aveo U-VA is enhanced by the large, curved clear-glass headlamps and fog lamps that project like spotlights from the lower part of the bumper. The spruced up, eye-catching interiors is also to increase the appealing factor of the new aveo U-VA. A fully integrated audio unit, user-friendly air-conditioning dials and soft plastics will make the new Aveo U-VA stand up to the rivals like Hyundai i10.

With the change in the styling, GM Chevrolet also introduced two new petrol engines for the new aveo U-VA.  A 1.2-litre developing 84bhp and a 1.4-litre unit with a power output of 98hp became the new powertrain of new Aveo. But Indian Aveo U-VA will continue with same engine that powers the current U-VA. Expect the price to be marginally higher. Aveo U-VA currently retails between Rs 4 lakh and Rs 5 lakh. 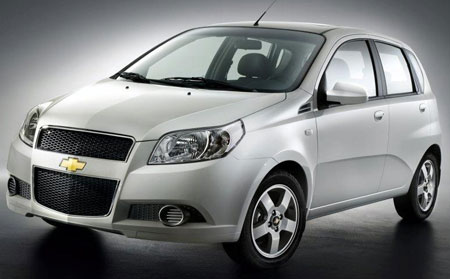