Have you heard of recession? I heard a lot! but now i suspect the credibility of those mediahouses. Within a span of thirty days we have visited the launch of four major cars out of which three of them are premium hatchbacks. We saw the Maruti Suzuki’s Ritz and Honda’s Jazz following the two is the Fiat’s supermini – the Grande Punto. The 350km drive from Delhi to Himachal gave us an opportunity to test Grande Punto to its extreme.

1)  Fiat Grande Punto: Styled by the maserati designers, Grande Punto stands odd among the toy cars with its sleek styling. The large,curvaceous grille reminds the legendary Maserati and teardrop-shaped headlamps are not just classy but also conveys real dynamism. The front overhang is large to score higher rating at the EuroNcap but the designers get the credit for making the front a homogeneous unit there is no clear line between windscreen and bonnet. As typical of any italian cars, flowing lines all over the car. A strong shoulder line emanates from fender flows all the way to tailgate. The glassarea is not huge though Grande Punto sports a front quarter glass. The roofline tapers at the near the C pillar and merges with the pillar mounted taillamps. The rear is not attractive as front and the punto’s vertical taillamps like in the case of Ritz might be a subject of debate. Overall, the grande punto inherits the distinctiveness of its italian siblings and is quiet impressive. 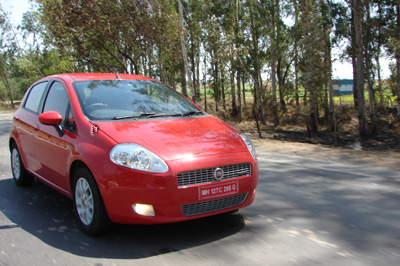 3) Fiat Grande Punto: On the engine performance, there is not much difference between the paper and on the road except an one big surprise. The 1.2L gasoline mill is puny to pull this large hatchback.  It’s very much underpowered. Who would love it when you have 1.4L and legendary 1.3L multijet in the same car. Fiat has taken a bold step to launch the 1.4L FIRE instead of fiddling with small car excise duty.The bold step really does wonder. Though the rev savvy would beg for much powerful engine, the 1.4L is quiet adequate for Indian roads. It hits a top whack of 150kmph and at the same time driveability is also good. The biggest surprise the monster 1.3L multijet has turned softer. It’s not involving but the power delivery smooth and progressive. It scrotches all the way to 160kmph but it suffers from narrow power band.  Having driven all the variants, i would say 1.4L gasoline is the clear winner instead of 1.3L diesel unit.  The transmission unit makes most of the engine but you have to get used to. The clutch bite is sudden and  the transmission is rubbery. Grande punto  devoids the practical reverse gear lock system.

4) Fiat Grande Punto:Running on Goodyear 195/60 tyres the Grande Punto is an excellent compromise between ride and hnadling. We will come to ride quality in the later part of the test drive report, the handling is impeccable.  Steering is sharp and it transmits the right amount of feel to the driver. Also it is light like in any modern hatchback to zig-zag in the traffic. But what also hampers the punto’s capability is its large turning circle radius (5.4m)! similar to palio, you turning the car to 360″ needs large number of iterations. 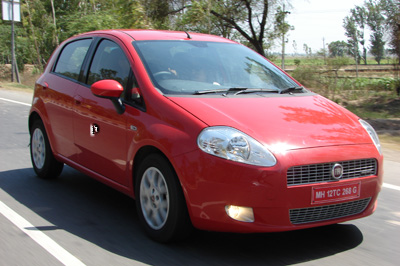 5) Fiat Grande Punto: Braking is through ventilated disc at the front and drum at the rear. ABS is a standard fitment in emotion and emotion pack variants. 1190kg machine (punto diesel) stops with ease. The brake pedal is sensitive but lacks progression.  Straight line stability is superb and equally good is it cornering characteristics. The lively chassis which is capable enough to move the punto with much powerful engines (Remember Grande Punto Abarth edition) makes the driving a delight. The raspy exhaust note adds to it.Ground clearance at 165mm is quiet decent to move over large speed breakers of Indian roads. 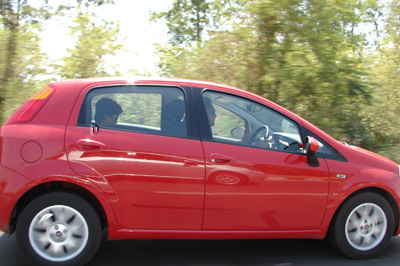 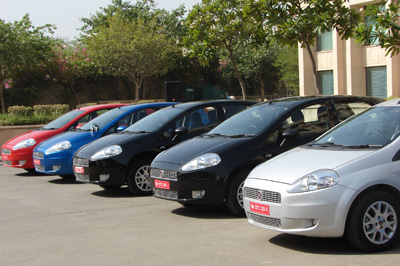