It must be a ridiculous question! Astounding success of swift petrol version i.e. it has already sold over 60000 units since its launch making Maruti an invincible player in compact car segment. Even though Maruti is holding over 50% market share in Indian car industry it does not lose its appetite. Maruti has decided to roll out at least one new model per year that’s why it launched Maruti zen estilo even in December (not an auspicious time to roll out new model-many will not have money since it is next month to festive time in India).Maruti has launched two variants of swift – LDI and VDI- priced at 4.71 and 5 lakh respectively J.D. Power estimates diesel’s share of India’s passenger vehicle market will grow to 35 percent by 2010 from 30 percent now. Maruti decided to throw a stone in tata’s well established diesel market. Maruti knows well that Indica has become synonymous for diesel, so it offers a complete package that can challenge any car of its class.

Generally petrol fonder are frustrated of diesel because of its higher maintenance cost, it is expensive relative to petrol version and because of its noise and poor resale value. Common rail direct injection (CRDi) claims to resolve some of the problems, swift diesel is using that technology. So the specifications are here and we will decrypt it and find what we can expect from it. The vehicle is already being offered as Suzuki Swift in markets such as Poland, Hungary and the UK at a price tag of £9,799 on the road. Maruti play safe it is evident as it preserves the same chassis and the only difference from the swift petrol version is the engine, hence I wish go in detail.

Now comes the most important part, what we can expect from the Engine 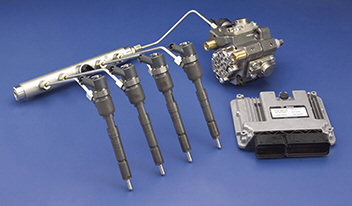 The technology behind swift diesel (CRDi)

The car is heaviest in its class but don’t worry it is provided with powerful engine. The engine’s technology used here is similar to the one used in Mahindra Scorpio i.e. CRDi. Thanks to Maruti for making it available in compact car itself. Fiat, Opel and Suzuki co developed the DDiS(Diesel Direct injection System yet another term coined not from R&D but by marketing dept) engine, which will be the country’s first super compact common rail diesel engine. It will also be the lightest diesel engine, and hence higher the power-to-weight ratio. With a total displacement of 1,248cc, the DDiS engine puts out a peak power of 75bhp (5bhp more than the European version) at 4,000 rpm. With a 16-valve cylinder head, this DOHC engine is also aided by a fixed geometry turbocharger, an intercooler and a cooled EGR system (exhaust gas re-circulation) which results in flatter torque curve which makes it most powerful, fuel-efficient and low emission engine in its class. The engine meets the current Bharat Stage III emission norms, but is capable of meeting the Euro IV level emission standards. The transmission is 5 speed synchromesh. Maruti is well known for its mileage here too we can expect the same with its advanced engine.The car is said to offer an impressive mileage of 61.4mpg(21.8kmpl)in UK and NDTV estimates mileage as 22kmpl as against TATA indica turbo which offers an average mileage of 16kmpl

What we can expect from the numbers:

The steering system is analogous to indica v2 and has a turning radius of about 4.7m. The product comes with P-EPS electronic power steering i.e. steering is assisted by electronic system hence demands lesser effort to negotiate a turn. The swift petrol version has some problems with its steering i.e. you have to pull it suddenly as it is loose in straight ahead position while taking a turn. Hope this will be fixed in this version (check it wile you test drive). The lack of a driver’s switch for the nearside electric window was unforgivable. The swift has slightly shorter wheelbase (the centre distance between the front and rear tyre) than its rival getz but it has widest track(distance between two front/rear tyres) in its class making it more stable and offers better handling. Ground clearance (the distance between ground and lowest part of the vehicle) is 170mm which is good for Indian roads. You no longer have to adjust the rear view mirrors often, the oversized outside rear view mirrors (in fact more than most sedans) offers greater view. Front brakes are ventilated disc type and rear one is drum.

Luggage space is 232 litre as against 290 litre offered by getz and santro. You can get more space by folding the rear seat 368 litre. But notice that volume do not alone matter when comes to luggage space you have to concentrate on effective (usable) space depends on dimension of your luggage. The windscreen and the rear glass are smaller than other cars in the segment and hence reduce the visibility. It cannot match getz when comes to space (leg room and shoulder space offered by getz is best in its class).The rear seat offers generous space for two but the car remains frugal when comes to three. The Swift’s adjustable headrests at the rear are a good addition (available only in VDi model). However, the front seats are comfortable and generously wide. The electronic climate control gives you accurate control of the cooling. McPherson strut in front, torsion beam and coil spring set-up in the rear and 165/80-R14 tyres provides you softer ride in the city. Coming to colour the Maruti offers swift 8 colours (but check the availability in your nearby showroom!).

Sadly,front airbags(protects the driver from collision with steering during accident) is not offered in both versions. ABS (antilock braking system) with EBD (electronic brake distribution) comes as optional and it helps you when you travel on a wet surface. Intelligent computerized theft system, Cabin light, cup holders (two at the front and one at the rear) and removable ashtray are the added features. Child lock is offered in both versions. Though alarm when key is not removed is useful it has other side too (you can’t sit with door open and radio on for example), the seatbelt alarm is annoying while maneuvering.It is important to mention Maruti customer support(enjoys the first place in JD survey)which is very important for a maintenance oriented diesel car.

Though you have to pay an additional premium (40000-50000 rupees) for diesel version the car seems to be promising. But Indica remains price competitive and also there is word from Maruti that this is an introductory price, there will be revaluation.

The Swift diesel car also qualifies for a lower 16 percent excise duty versus 24 percent for its petrol variant. GM is going to launch UVA diesel version and much awaited chevrolet spark (nothing but dawoo matiz).Hyundai is also planned to rollout many diesel models this year-santro,getz diesel version and with tata’s indica CRDi customers (wait for some time unless you are a die hard Maruti fan). Maruti had already experimented Zen and esteem diesel but it failed hence all its diesel future lies in swift and it hopes for the best. Also there is a fear that it will eat swift petrol sales. We will wait to see whether swift will do another swift for Maruti

P.S: This post is written by my brother Karthick, who is in his final year of automobile engineering. I hope he will write more articles related with Automobiles and other his fav. fields in the forthcoming days. — Vicky