Even if you avid auto industry follower, you might have forgot the fact UV segment was once ruled by Tata Motors. I’m not kidding! its true. Tata was favourite with UV lovers with its sierra and then sumo and safari ruled the segment for long time. But its lethargic attitude and competitors like Mahindra pounded every flesh out of it and Tata was pushed to the boundary which it once ruled. However, the picture is very different now. The segment itself has now changed from niche to mainstream. Every other manufacturer in the industry now wants a share in the ever growing segment. Also the love for ladder frame and rugged SUVs are gone, now psuedo and compact SUVs are the favourite. Tata eyes this crowded space with its distinct Nexon. We drive it to find out the Tata Motors can raise from the ashes. 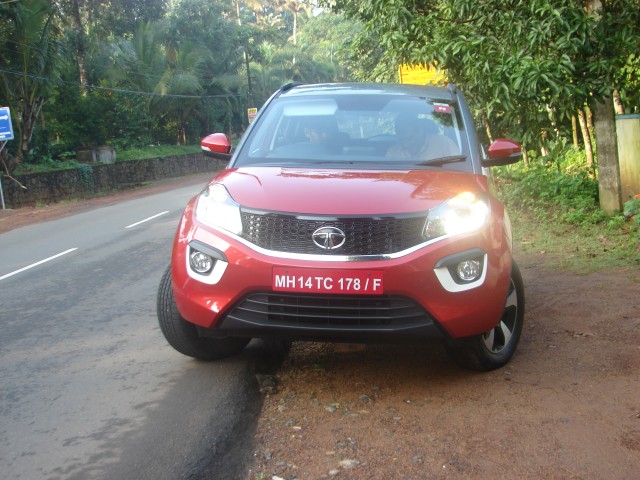 When the Nexon concept was unveiled at 2016 Auto expo, it was clearly one of hottest car discussed. It earns lots of praise for its spectacular design, thanks to Tata designers, Nexon production variant lookalike the concept. Its distinct and jaw dropping from most angles. The chrome runs all through the front of Nexon. The ceramic strip which runs along the belt line and flows in the rear side too. Along with the sloping roof, this gives the Nexon a coupe a like lovable style. But the lighthouse and ceramic accent sometime reminds us of Vitara Brezza. 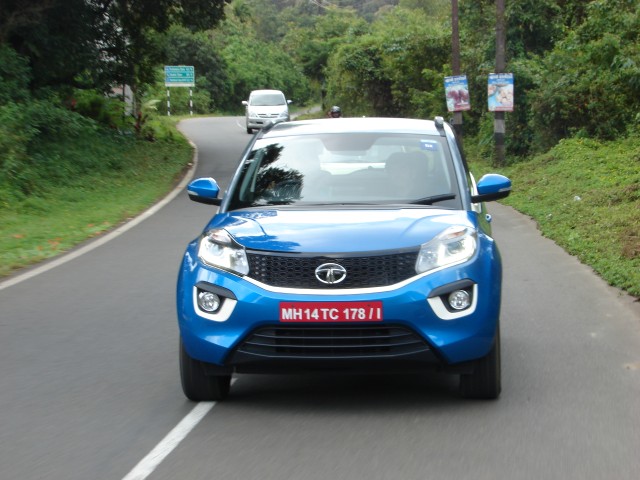 Interior design too is centered around gun metal strip which runs across the dashboard. The upper part of the dashboard is eye catching however the crude plastics on the lower part is not what typical for a compact SUV. The glove box is large and it doesn’t drop but unlocks in two step manner to prevent documents from getting dropped. The instrument panel is quite usual but we would have preferred a slightly larger and chunky steering wheel instead of Tiago lift smaller one. The touch screen ICE system lets you to play songs (compatible with android auto), navigation and reverse camera (you don’t have to slot the reverse gear. Harmaan audio is good but not exhilarating and touchscreen sometimes lags behind if you are in a hurry. Stowage space is low especially the door pockets are shallow to maximize the passenger space. The boot space is large it can almost swallow a washing machine inside it. Ingress and egress is tough especially for rear passengers as the sloping roof demands some yoga from passengers to get out of the car. Also position of start/stop button and aux ports is weird. 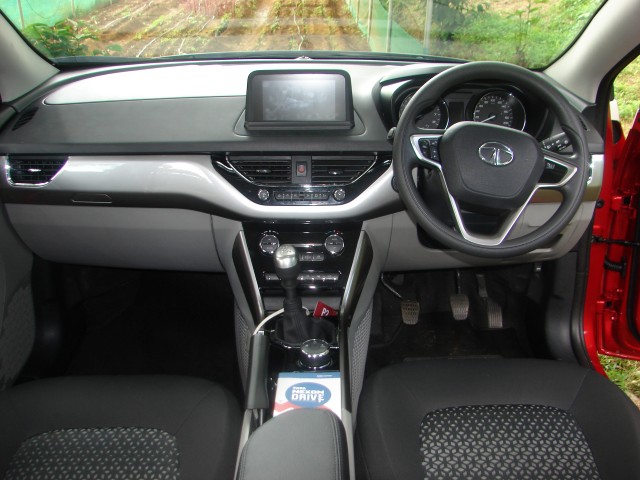 Turbo petrol mill (1.2L, Turbocharged, 110bhp,170Nm) under the hood of the Nexon is quite punchy but it needs lots of downshifts to overtake and to climb up the steep ghats of Idukki. Tata offer three modes (Eco, City and Sport) you can choose as per your driving needs. The modes are not just notional but the engine character changes too. The sport mode is rev friendly and city mode demands more gear shift from you to stay in the power band. Also 6th gear seems strictly limited to 6 ways. Nexon diesel (1.5L is punchy too and its brings loads of torque once you cross little upwards of 1500 rpm. To sum it up, you won’t feel less equal for choosing between two engines. Unlike the engine,the gearbox is not where you like to play, its not slick and passes mild vibrations. Also NVH is very poor on both models you could hear the clatter. Road noise also creeps in disturbing the overall premium feel of Nexon. 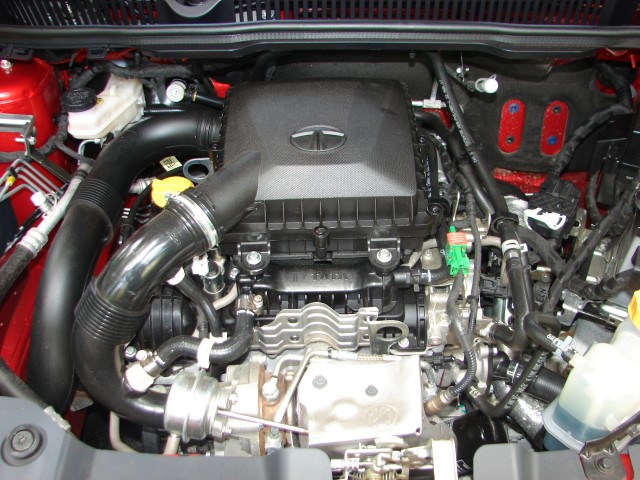 Since the Tiago, Tata engineers seems to have cracked the balance between ride and handling. Nexon shines with its sharp handling and 209mm ground clearance (unladen) is no deterrent. Body roll is not alarming, you can attack the corners with confidence. The steering gains resistance as your speedo hits higher speeds. You can also move over any potholes/speed breakers without scraping the under body. We driven the Nexon in the ghats in Kerala and within Cochin city. The result, we could test the Nexon ride-ability and handling over sharp corners but couldn’t test its high speed stability. 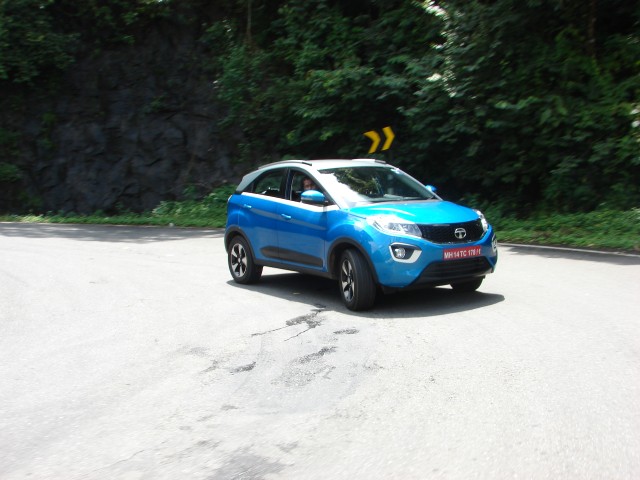 It comes with fit-bit type unique watch which you can use to operate the car without the hassle of carrying the key. Electrically operated mirrors, touch screen system, DRLs and projector headlamps are some of the key features of Nexon. A 12V power point and rear air-con are really useful for rear passengers. 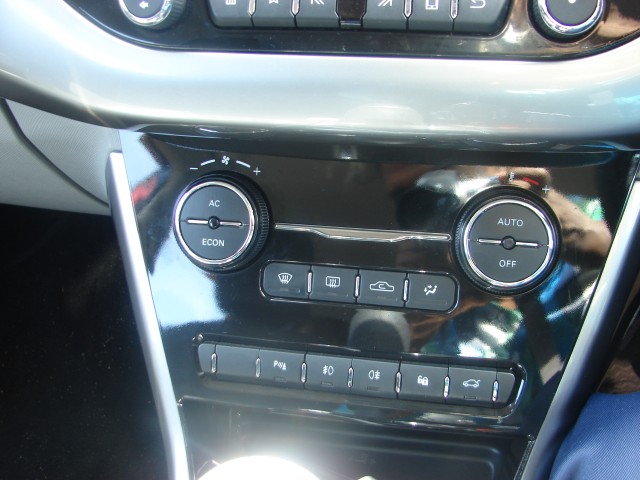 Despite its cons like poor plastics, lack of features and poor NVH. Nexon ticks all the right boxes which this segment consumer will love. Nexon is pleasing to look, features punchy engine, glides over potholes with ease and ride and handling is good. Tata shouldn’t miss the opportunity to make Nexon a winner in the hotly contested segment with a sensitive pricing, good marketing and after sales support. Otherwise, customers could give a miss, in millennials era, a good product alone is not sufficient. 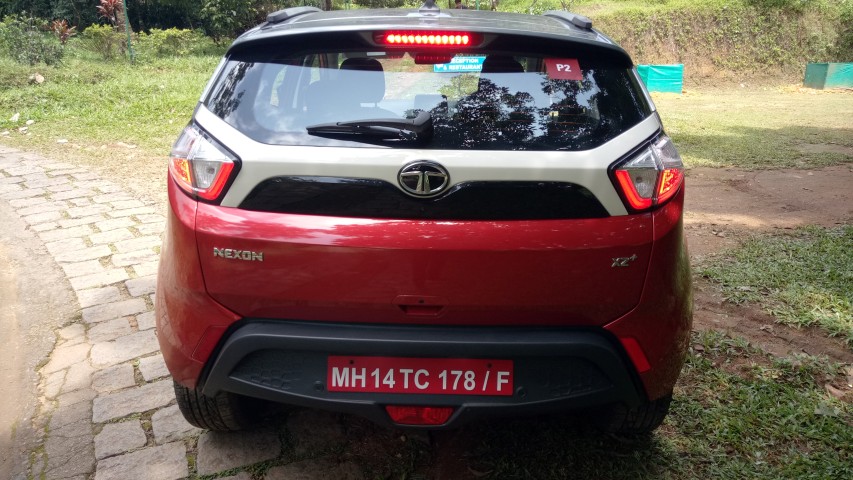